When Robert arrives in town with his dark good looks and mysterious background, Emily has a huge crush! It’s almost enough to take her mind off this year’s school play … miserable, wailing Wuthering Heights.

But Robert is no prince, with his black moods and stormy temper. The beautiful untamed moors would be the perfect backdrop to their fiery romance, if only Emily could work it out.

On stage or off stage, will emily ever be the Cathy to his Heathcliff?

I really enjoyed Jane Airhead, which was about a girl obsessed by Jane Eyre, and as I’m on par with Charlotte of that novel when it comes to obsession, I was a little hesitant about a book which would essentially be Jane Airhead but about Wuthering Heights, because Wuthering Heights … while it’s a great novel, is nowhere near my favourite, and it’s miserable and everyone’s extremely disagreeable. …Which, funnily enough, is very similar to the views held by this young adult (YA) novel’s heroine Emily! And we both change our minds at the end of it all. The 14-year-old Yorkshire lass isn’t exactly thrilled to find out that the school play will be Wuthering Heights, a book she only managed a few pages of, because let’s face it, it’s not exactly light and cheerful.

As the novel progresses, Emily gets into the original novel more and desperately wants to be Cathy – especially if new boy Robert can be Heathcliff. Things take a turn for the “wait, WHAT?!” for her when it turns out that the uncle Robert was staying with falls seriously ill, and it has some unexpected (but very enviable) consequences for her.

I really enjoyed Wuthering Hearts. This time, I knew what to expect more from a YA novel than I was before, so I could put that aside and just focus on enjoying the story. Kay Woodward writes in a lighthearted style that is really appealing and fun to read. This novel is slightly darker in tone than Jane Airhead, but then again, so is novel it was inspired by, so it is to be expected.

Emily is a great character – she’s not just someone you put down easily, but my favourite character is probably Robert. He might have been inspired by Heathcliff, but if there’s a choice between whom I’d rather snog, Robert easily has my vote. He’s not the most pleasant of guys to try and hang out with, but he’s not a psychopath like Heathcliff, and he never gives me the creeps. Sometimes I’d like to box his ears when he’s really grumpy, but he has such a wonderful voice that who can keep a grudge? (I know it’s a book and can’t actually hear his voice. It’s the principle of the thing.)

Another thing I like is the realism. You have the queen bee, of course, so the novel is “down with the kids”, because we all know the resident queen bee from our own school days, even if she has a different name to the character in the book. The way Wuthering Hearts deals with some serious social issues as well is commendable. Kids have real problems too, and while I suppose it was technically fairly predictable what the biggest problem in question would be, I didn’t actually have a clue until it came out in black and white.

Favourite scene is definitely when they’re visiting the Brontë Parsonage in Haworth (never been … yet!) because it gives you a glimpse of what it’s like to visit, and how a visit might affect you emotionally. Not just any boring, old museum exhibit … The scenes on the moors were very atmospheric as well and fitted in great with the windswept wildness of the original novel.

This is a fab book. While I prefer Jane Eyre and therefore automagically am more partial to Jane Airhead, Wuthering Hearts is a take on Wuthering Heights that I easily prefer over the original. There might be some dysfunctionality (is that even a word?) in this novel too, but at least everyone isn’t miserable, hateful, spiteful, neurotic, psychotic and (importantly) no puppies were harmed – and I actually really like these characters. The intended audience is 12+, and I’m way past that, but I was still hooked. It’s a good read, a must-read for fellow Brontëites, and could work as an easy introduction into Emily Brontë’s original. 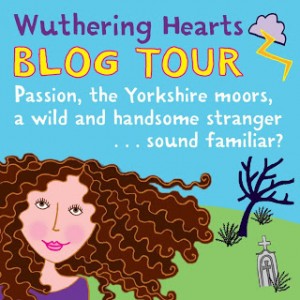 Kay Woodward is currently blog touring Wuthering Hearts. Tomorrow, I have the pleasure of welcoming her as a guest blogger. Fellow Brontëite as she is, she’s put together a great post about Mr. Rochester vs Heathcliff … Check back tomorrow morning to see which one gets her vote! 🙂

Big thanks to Andersen Press for sending me this review copy! Wuthering Hearts is out in the UK right now!