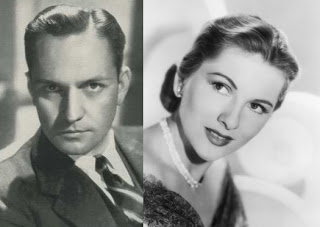 This Radio Hall of Fame adaptation was first broadcast on 13 February 1944, and while the whole thing has a runtime of 59:38, don’t let that fool you. It’s a variety show, so it’s not just a radio adaptation as such. No, no, no. There are songs by a choir and other various music. Then, about twenty minutes in, Joan Fontaine is introduced. Did you know she won an Oscar? I didn’t, but it’s something they point out (1942, Best Actress, for Suspicion).

What they present is “an impression of Jane Eyre”. And a very short impression at that. It begins around the 21:16 mark, and ends 32:05. It’s paraphrasing the whole book. Or, no, actually – it’s so abbreviated it might as well be an acronym. That’s what they do with the story. There’s hardly even time for Dramatic Music, and that says a lot!

It begins with not meeting Rochester (the very handsome Frederic March) for months after coming to Thornfield. Blanche gets a brief mention, but she’s not actually in the story. When Bertha is revealed, it’s done with the words “behold the impediment to our marriage!” – because hey, when you’re only out to make a ten-minute impression of a 600+ page book, you have to take shortcuts. Jane flees to Ferndean, allegedly 200 miles away (as opposed to the 30 it normally is), to meet an aunt who is really happy to have her back (!).

I think I’m happy it’s only about ten minutes long. They manage to screw it up very well in that time, that I dread what they would’ve done to a longer version.

The rest of the programme, after Jane Eyre has finished, is just a continuation of where they left off: a variety show. I only skimmed through it to see if there was any more to the story, but there wasn’t.

So in short: Joan Fontaine was good, but the movie version of that year is so much better.