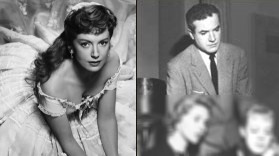 Act one ends 28:41, and on it follows a biography of Charlotte Brontë and the book, which is nice and educational. After all, it’s not university theatre for nothing! Act two commences at 31:37, with the proposal.

There’s no wedding to-day, of course, and Jane goes “miles away”, where she is befriended by the Rivers family. While I was one of those thinking “St. John” is pronounced “Saint John”, I was quickly corrected by the first adaptation I saw. In this one, despite the fact that you’d think Deborah Kerr would know how to pronounce it (being of these isles), they call him “Saint John” as opposed to “Sinjin”. I have no idea why. Some Dramatic Music is sure to drown out any objections.

Anyway, Jane ends up marrying Rochester, of course, and it all ends at 55:12, with the last few minutes being about Anglo-American literature and how they’d be adapting Herman Melville’s “Moby Dick” for next week’s show.

This radio adaptation follows the book in an okay sort of way, although it’s shortened, obviously. There’s no gypsy and that sort of thing, but it’s to be expected if you want to fit the whole thing in in under an hour. Still, I’ve heard worse.