I’m bunching these two radio adaptations together, even though they are completely different productions with different cast and different scripts, done nearly two decades apart. There’s a method to my madness! Why write two posts about the same thing when you can write one?

Why lump them together? Because they’re both very good. 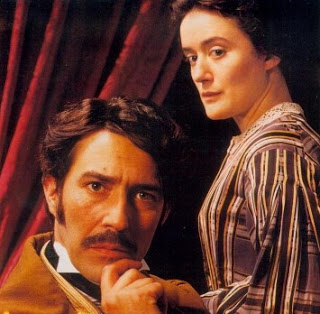 With runtimes of four to five hours in total, there’s plenty of time to let the story develop like it should, and when you listen to it and swoon at what’s being said, you know they’ve done something right. It’s as passionate as it should be, and Brontë’s prose shines through in marvellous ways. It’s not too gothic, not omitting most of the story, and it’s not full of Dramatic Music. Sure, there is some music, but it’s not the Dramatic Music from the 1940s. It tells the story like it should be told.

Things I wasn’t keen on: adults playing children. Both versions suffered from having the adult Jane’s actress putting on a silly voice to be child Jane. If they can get children to play the part on screen, why can’t they get a child behind the microphone?

As the latter of productions had Ciarán Hinds as Mr. Rochester, who would play the same role again on screen in 1997, a comparison must be made. Yes, he’s a bit too shouty here as well, but at least there are no baggy trousers or ugly ‘taches to distract. Or maybe they were good diversions, actually, because now that they aren’t there, we just get the full brunt of the overpowering force of his characterisation. Alas, his passion did make my heart flutter, but not quite as much as Patrick Allen did.