From ComicCon 2011, an interview with Sarah Jones – who plays Rebecca Marsden in upcoming show Alcatraz. 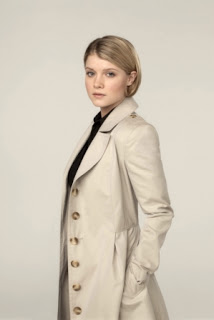 Can you tell us about your character?

Sarah Jones: Rebecca Madsen is a detective for the San Francisco Police Department and she is married to her work: it’s what drives her and as the series goes along, you will find out why she is so invested in what she does. She gets recruited by Sam Neill to a special task force that has to try to figure out why these former prisoners are reappearing and why they haven’t aged. In the pilot, you will find out why she becomes so invested in the mystery of the reappearance of the Alcatraz crew – it’s not just the prisoners, it is wardens and everyone on the island – because she has a very personal connection.

What did you first think when you read the script?

She is told at the end of the pilot that she is not allowed to tell her fiancé and her uncle – both established as important people to her – about her new job, so is that going to play a big part?

– Yes, it is. But to be honest with you, she might confront some of that sooner than later. I don’t know much, but the little bit that Liz Sarnoff will give me about Rebecca and what’s going to go on, she hinted that… Rebecca calls it like she sees it, so she might confront her secret with her relationships sooner than you think.

How was it working with Santiago Cabrera?

– He’s just so fantastic. What could be bad about working with Santiago? But everybody on this cast is fantastic, it’s been such a blessing. We all just gel. It’s been so lovely so far. We’ve just had a blast. It’s really fun.

Can you talk a bit about your character’s relationship? Do you know your history?

– Not too much. I think we both understand where we’re coming from a bit, but we don’t know the entire past yet, and I don’t think we need to. Santiago and I are just going with it and just being comfortable with each other as two people who are engaged and who are also work associates would be.

As an actor, would you want to know more or less about where your character is going?

Whenever there is a situation that involves something that’s personal about Rebecca that I think might involve something in the future, I feel really comfortable in talking to Liz about that. But other than that, I am glad I am in the dark because it is a mystery that we’re figuring out after all, so the less I know, the more I am surprised and the more I’m surprised, the more people will be able to follow along and go on that journey with me. That’s all I hope to do. 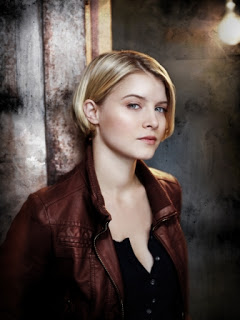 So is Liz keeping you in the dark as much as Sam Neill’s character is in the show?

– Yeah, basically Sam Neill is Liz Sarnoff. She basically leaves a trail of breadcrumbs for me. But I don’t want to know everything.

Why do you think people are going to be interested in a show about Alcatraz?

– I think the simple folklore surrounding Alcatraz, on its own, is interesting enough, and because there will be flashbacks, we will be going into that prison every week and seeing what that was like, so you will see what life was like inside Alcatraz. That subject alone intrigues me.

Did you do any research into the subject?

– Yeah, I love history and with America being such a young country in comparison to the rest of the world, having that piece of folklore that we can claim as our own is exciting, so I read a couple of stories about the inmates, from the inmates’ perspective, but I didn’t want to get into the history of Alcatraz too much because that doesn’t really interest Rebecca. She wants to know about the prisoners and what they were like. I also watched a fantastic documentary called Alcatraz Reunion which is this documentary about these former prisoners who went back to Alcatraz in their 70s and 80s. They were talking about their experiences, which was fascinating.

Did you go there after you had been cast?

– I didn’t. But we shot there, which was awesome. We had so much fun. Jorge (Garcia) and I were boat captains! But it was funny, because it was kind of hauntingly beautiful. I hope we can go back as much as possible. It’s just an incredible experience. I wasn’t particularly creeped out there, but the set of Alcatraz that they have now built is creepier and more eerie to me than the actual prison.

Do you think Rebecca thinks there’s a more supernatural explanation? Or does she think there is a more scientific answer?

– I would think that she’s going to start with some logic because that’s what she knows, that’s how she knows how to solve crimes. I would say that she is pretty much the doubting Thomas of the entire pilot. So I think first she would go with logic and then if there is a supernatural aspect, I think that is something she is going to have to learn and something that people will follow with her through the series.

What are you looking forward to in the show?

– I think just finding out what this mystery is. And just working with everyone: everyone is so talented, writers, crew, cast, everybody. 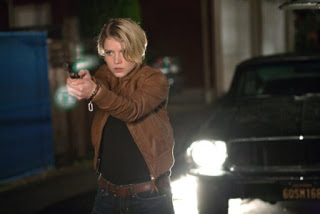 What training did you have to do?

– I have obviously learned how to shoot guns. When I got the pilot, the first thing I did was started training and boxing. I was working with this former boxer champion who was awesome – his name is Ricky Quiles – and that was fantastic. Just in case I had to get in a fight situation, I want to be able to throw a punch even if it is a stunt move, I want to be able to throw a punch that a man’s going to believe – Rebecca knows how to do that. And I run. I run. Because there is going to be some running in this series! And it’s going to be in San Francisco which we all know is not exactly a flat surface, so that’s how I get in shape. She’s a guys’ girl. She knows how to do her job and do it well, she knows how to protect herself but she’s not a slick secret agent. She’s one of the guys and she’ll go home at the end of the day and have a beer and kick it at her Uncle Ray’s bar. Or go home, have a burger and go to bed. Which is something I love about her.

Has there been one action star moment?

– There was, but it got cut out because there wasn’t enough time. It was a great chase scene, it was so great, and it was with Jack Sylvane – Jeffrey Pierce – and we had so much fun: it was in San Francisco, because we shot a few days in San Francisco, both at Alcatraz and in the streets, in Chinatown, it was awesome. But you have to set up the story, that’s the most important thing for the pilot, so that was sacrificed. That was the sacrificial lamb of the pilot.

You’ll hopefully have to do it all over again in future episodes.

– That’s fine by me! I’ve been running for it, I’ve been training for that.

And running in boots?

– And running in boots.