From ComicCon 2011, an interview with Jorge Garcia – who plays Dr. Diego Soto in upcoming show Alcatraz.

What made you want to get back into a big concept TV series again? Was it the people attached, like J.J. Abrams and Liz Sarnoff whom you know of course from Lost?

Jorge Garcia: Totally. J.J. makes the TV I want to watch and so to get to be a part of it, all the better.

Was there any trepidation going into another show that has some sort of, “We don’t really know what’s going on,” concept?

– Not when it’s these people. After Lost ended and I came back to the mainland, I did feel like, “What’s going to be the next thing?” I was basically prepared to take my time and maybe not work for a while to give people enough time to forget where I came from. But then this surfaced, and it came quickly and it was great. And I was excited to be a part of it.

Did you say anything to J.J. like, “Do you actually have answers to any of these questions?” before you signed up, or don’t you really care about that?

– Me personally? No. I don’t because I trust these people. I do know that they had a meeting at one point with executives saying, “No, no, we have this,” – their bible that they are going with, with what the big picture stories are going to be. But I’ve got used to working in the dark, and I kind of dig it.

What can you tell us about the premise? It sounds a bit bizarre.

– Thing is, just the title alone will get some people interested: everyone has heard of Alcatraz, and they know that really bad people were there. Bad people are intriguing. And it’s the kind of thing where people go, “Okay, we know this happened.” We know Alcatraz closed in 1963. And we know that everyone was taken off it. But then you go, “But why did it close?” And then you start coming up with what could be a crazy reason for that to happen, and then they created a show around it. It’s pretty exciting for me.

Can you tell us a little bit more about your character?

– Yeah, I play Doc Soto. I’m the Alcatraz expert of the group. I know more about Alcatraz than maybe anyone on the planet, and I am kind of obsessed by it and about criminals in general. And as to why and where that obsession was born out of, that gets revealed pretty early in the first season, and I’m excited about that. But I’m the one who is there so no-one has to look in any books because I wrote them all. So when these bad guys suddenly start re-surfacing, he’s the guy who tells us what to look out for and what their M.O. tends to be.

What are your PhDs in?

– They are in Civil War History and criminology. Are you testing me? I was like, “What did they say in the pilot?”

So you are interested in the past as well?

Is it a nice change to play the expert, as different from Hurley who knew nothing?

– Oh yeah, he is definitely smarter, for sure. And cleaner shaven. Yeah, it definitely feels like a completely different guy and that is exciting, for sure.

Plus you don’t have to traipse through a jungle every day?

– Totally. I don’t have to deal with scorpions and mosquitoes and whatever else was in that jungle.

Did you do a lot of research?

– Not really. As far as playing the comic book shop owner, just hanging around in that little shop that they created, I was like, “Yeah, I get this place. I can do that easily.” As far as being an Alcatraz expert, the script pretty much told me what to say, I just had to deliver it with confidence. That was pretty much all I needed. 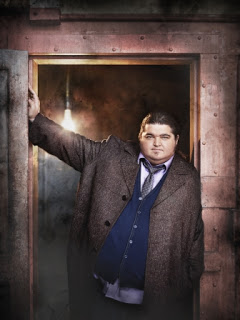 Obviously they haven’t told you everything, much like in Lost, but have you formulated your own theory as to where these missing prisoners have been? Or what is going on?

– Well, no. I’m really hoping Alcatraz is actually a spaceship and you will see the whole island lift off but that’s really a long shot.

What are the similarities to and differences from Lost?

– It’s a completely different kind of island. There’s a lot less plant-life. But it’s easier to say how alike it is to : they’re both on an island; they’re both shrouded in mystery; and there is a guy on the show who looks a lot like a guy who was on , and that is pretty much where the comparison stops.

Is it wrong to label it the new Lost?

– There will not be a new Lost. If you are going somewhere looking for a Lost, go to your DVD store and find it. Everything else that you are chasing is going to be different, something new. And let’s face it, if we gave you again, you’d be like, “Yeah, I liked it the first time I saw it, and it was called Lost.”

How was filming the pilot? Did you actually film anything up at Alcatraz itself?

– We spent three days in San Francisco, but I think that might be the extent of it. I know the special effects guys took a lot of pictures of Alcatraz, from every angle so I’m pretty sure it’s going to be green screen and parking lots when we’re ‘there’. But we went there, and Sarah Jones and I captained the Alcatraz boat. We also got to go to places on Alcatraz that other people weren’t allowed to go at times, which was kind of fun and made you feel special.

You seem to be doing another series here where you don’t know much of what is going on ahead of time. As an actor, would you rather know more of where the story is going?

– There is a benefit to both. I do like acting the grey areas a lot. I think that always gives a certain credibility and realism to a character, where they are not 100% good or 100% bad. And one of the things about acting in the dark in that way, is that it gives you moments that you might be a little contradictory – where you act differently than what you would have anticipated with knowledge that you might get later – and I think that is a very human characteristic to be, so I enjoy that. I think it’s how you build a character.

What are you looking forward to in the show?

– I am looking forward to episode three a lot. I got a little preview in my visit to the writers’ room and there are some really cool things that they said were coming up pretty soon. You get to see why Doc is so fascinated with bad men.

How is working with Sam Neill?

– Sam is great. He’s this very sophisticated man. He drinks wine. He’s this experienced actor who’s been in the business a long time and stuff, but then, he’ll turn around and be like the uncle who tells you to pull his finger, and that is the beauty of Sam.

How has your experience been so far at Comic Con?

– It’s been great. It’s been great. Everyone has been very nice. It’s kind of fun when they are rushing you through the crowd because the energy in that room is just really, really exciting. It’s just full of enthusiasm so it’s really fun. We got to go up to the Warner Bros booth, which is really high up off the ground, so we could get a really good look. I have this app to do a panorama shot so I was trying to take a picture of the whole floor.

Is there anything you particularly have your eye on on the floor?