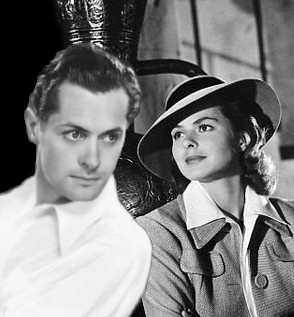 Like the 1944 Young/Welles version, this too is presented by the Lux Radio Theater. Originally broadcasted on 14 June 1948 and with a runtime of 42:23, this radio adaptation of Jane Eyre stars Hollywood hotties Robert Montgomery and Ingrid Bergman. We already know Rochester can be various degrees of gorgeous, but no make-up in the world could hide the fact that Ingrid Bergman is one of the most beautiful women who has ever graced the silver screen.

Beginning at Lowood School, Jane has a conversation with Brocklehurst and we even get a scene where she’s being told to stand on a stool in the middle of the room for twelve hours because she is a liar. Wow, a radio Lowood that isn’t just ignored! There is no Helen Burns or anything else though, but at least that one scene has been left. When it’s around her 20th birthday, Mr. Brocklehurst approaches her saying the school board are wanting to offer her a position as a teacher, but she declines. She’s advertised to be a governess.

Young Jane has an American accent. Adult Jane has a Swedish accent. And she’s supposed to be a born and bred Englishwoman. Funny, really. But hey, a Swedish Jane Eyre, I can’t help but give thumbs up to that!

To summarise, this version is very similar to the 1944 Young/Welles version, the events are more or less identical and some of the dialogue is lifted straight from it. Like I said, both are by the Lux Radio Theater, so that might be why. For all I know they might be identical, just that I didn’t pay enough attention to the first one. Millcote as Ingram estate – check. Jane being told off by Grace Poole after having snuck up to the tower – check. Rochester married off at 19 – check. Vienna/Naples/Warsaw – check. Scullery maid – check. Dramatic Music – double-check. 😉

So what’s (probably) different? Dr. Rivers… What’s with people and renaming the doctor “Rivers” and ignoring the actual Rivers family? They’re not in this one either. Dr. Rivers is the one called when Mason is attacked (Dramatic Music). He re-emerges at Lowood, which he happens to be passing, just in case Jane is there. She is, she’s actually a scullery maid in this one and is fairly miserable, having been told by Brocklehurst Rochester was leaving England forever. The good doctor tells Jane that Rochester is back in England again. She starts hearing voices and goes to Thornfield. Again, Mrs. Fairfax comes running from the cottage, the lovers are reunited and it ends with the first Rochester offspring having his father’s eyes.

They’re very similar, and both are good. Not sure which one’s best, though. On the one hand, there’s Orson Welles. On the other, Ingrid Bergman… Both decent 1940s adaptations. This one doesn’t have specific acts with ads inbetween, though, it’s just that you hear the audience applauding a couple of times, so it marks act endings, but no messages inbetween.