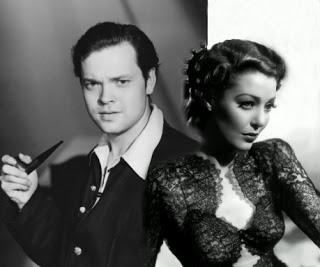 This radio adaptation, produced by Academy Award winner Cecil B. DeMille, was first broadcast on 5 June 1944 in the Lux Radio Theater, and stars Loretta Young as Jane Eyre and Orson Welles as Mr. Rochester. (Orson Welles, yay! *happy dance*) The total runtime is 57:59.

Before the show begins, they talk about the film, which seems to have been a big hit that year, and made Jane Eyre very popular. (Let’s hope for another revival with the new movie adaptation, eh?)

When the show starts, it’s with Jane at Lowood, talking to Mr. Brocklehurst, but after that, it’s just a short summary so we know Lowood was awful (no mention of Helen), and the next thing we know, she’s leaving it. Brocklehurst says she’s not welcome back, like, ever.

At Thornfield, we get to hear from Adèle, who does have a bit of a French accent. Mrs. Fairfax says Rochester has “such vile humours!” and sure, he’s not the cuddliest of people… (except of course in his heart – awww). The script reminds me a lot of the 1944 film, really.

Act 1 ends around 21:25 and is followed by talk about soap, Lux soap, which is what the filmstars use. I believe something along those lines were their old slogan, even in Sweden. I seem to remember my mum saying something like that once upon a time. The conversation feels dated in its gender roles, with how women should have nice skin and such. Question is, has society really moved on since then? Ca 24:14, Act 2 begins.

Jane saves Rochester from the fire, and is gone the next day. Jane decides to sneak up to the tower, but is caught snooping around by Grace Poole, who tells her off and says she must never go there again. Meanwhile, Rochester has buggered off to Millcote, which is described as the “Ingram estate”. Err, Millcote is just the biggest nearby town, and the Ingrams live on the other side of it? They all come back to Thornfield for a house party.

Again, the “and a little depressed” scene is interrupted by Mrs. Fairfax announcing Mr. Mason, and oh the Dramatic Music we get every now and then. Rochester is quite flirty with Blanche Ingram, and to be fair, Welles in 1944 playing Rochester? You could swoon for less! Not only is he flirting, he also tells her off pretty well, saying she’s only after his money. She’s “never been so insulted” in all her life, but at least it leaves him free to propose to Jane.

Act 2 ends around 39:56 and goes into – and this fascinates me as it’s such a reminder of the times –  a plea to not let used cooking oil go to waste. Instead, ladies are advised to save all the used fat they can, even if it’s fat skimmed off the top of soup, into metal containers (glass is a no-no) and take it to their butcher, who will pay them in both money and ration points. Used cooking oil can go to making equipment for the war, and medications and a lot of things, so it should not be wasted. It really reminds you that this was 1944, the height of World War II. In fact, this show was broadcast the night before D-Day (the Normandy landings). Poignant reminder of how soldiers fighting today in Iraq and Afghanistan are notoriously under-equipped. Perhaps we should start saving up our grease as well? If nothing else, perhaps it can be turned into bio-diesel. Anyway, the story resumes with Act 3 around 42:00.

There is almost a wedding, and afterwards, Jane says she still loves Rochester. He mentions wanting to be happy and how he was temporarily distracted by “an actress in Vienna, a milliner in Naples and a countess in Warsaw.” Say what? Céline might’ve been a bit of an actress, but primarily a ballerina from France, Giacinta was Italian but I don’t recall her being into hat-making, and Clara was German, not Austrian. Who’s the Polish lady? Weird.

Jane leaves, and goes back to Lowood, where Brocklehurst seems to have forgotten his vow never to open the door to her. She’s ready to beg for a position and he says they have no need for another teacher. There is need for a scullery maid, though, and she could do that. She accepts and is about to leave to go to the kitchen, when he says he’s had enquiries about her, as it happens. Something about a Mr. Rochester and that he was “leaving England forever”, but he didn’t bother replying.

Jane decides to go back to Thornfield, and there, she finds the house burned down. Standing in the rubble looking around, Mrs. Fairfax comes running from the gardner’s cottage to tell the story of how the house burned down. Bertha got out, killed Grace Poole, torched the place, died, Rochester blinded and so on. Rochester is apparently not out of England, he’s right there, because he comes out, and they are reunited, two years later he’s a dad and can see the child’s “large, brilliant and black” eyes and his own likeness therein. Dramatic Music and it’s curtains around 52:50.

The rest is made up of the producer and actors sucking up to one another, beginning with Loretta Young (plain Jane? According to the pictures I found on Google, she was quite the babe!) saying how they seem to be surrounded by brilliant producers. No, just the two producers, they point out (DeMille and Welles) and they joke around a bit and it’s a bit of light-hearted brown-nosing.

Similar to the 1944 film, as I’ve already pointed out, but there’s no mention of the Reed family at all here. Doesn’t matter, don’t really need them. Welles as Rochester gave me a craving to watch the film, but alas, I did not have it with me. The reason the radio adaptations have started to pop up here en masse all of a sudden is down to me remembering I could listen to them on the train to and from work. This one was started on the train and finished at lunch, while walking around the town where I work. (Bleedin’ cold it was too!)

It’s a fairly detailed version, a good listen and of course, there’s the swoon factor of Orson Welles, who manages to sound as smouldering as he was on screen at the time. Somehow. There’s just something about that guy. I don’t really have any major gripes with it, aside from perhaps the DRAMATIC MUSIC! Good thing radio plays have moved on a bit since then, eh? 😉