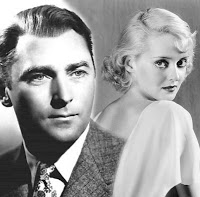 The MP3 file is 29:23 long, so the story is very abbreviated in this old radio theatre adaptation. It also features some really old advertising from the show’s sponsors, the gasoline brand Gulf, which is funny. It’s just like in one of those movies you see about old time radio shows!

This adaptation from the Screen Guild Theater and first broadcast 2 March 1941 is in two acts, starring Bette Davis as Jane Eyre and Brian Aherne as Mr. Rochester.

Act one is roughly at 2:30-15:36 and starts by adult Jane at Lowood, where she receives a letter from Mr. Rochester to come and be a governess. She does so. Adèle and her brief lines are spoken in a distinctly American accent. They’ve included the bedroom-on-fire scene, which here is more comical than anything else. It’s along the lines of:

As in, she really has to bloody persuade him to get out of bed. A bed that’s on fire. Eh? Surely he should jump up and out of it as soon as he wakes up and realises what’s going on? What’s up with that?

Act one concludes with Rochester declaring his love for Jane and then Bertha laughing in the background. Rochester says Jane has to leave at once, and she says she’ll be packed and ready to go tomorrow evening, but she wonders what horrible thing bonds Rochester and Thornfield together.

Act two runs approximately 17:25 to roughly 28:23 and begins with Jane packing her bags. She takes a last walk in the garden, where Rochester does a 180 on the “you have to go away” and proposes. In the night to her wedding day, Jane sees Bertha in her room, gets spooked and then there’s the wedding. The wedding is interrupted by Grace Poole, who says she’s the sister (!) of the now living Mrs. Rochester.

Jane goes to the North of England for a bit, meets a vicar and his sister, and then goes back to Thornfield, where “the mad woman” had set fire to the west wing, destroying it. Rochester can’t distinguish between Jane’s voice and Mrs. Fairfax’s. “Wait … This is Mrs. Fairfax? Isn’t it? Who is this?” Although he does admit he thinks he’s deusional, so fair enough. Rather liked this bit:

It ends with Jane saying “This is my heaven!” and so they presumably live happily ever after.

The sound fades in and out a bit, making it hard to hear at points. I don’t know what the original origins of this recording is from, as I found it available for download through a link at The Enthusiast’s Guide to Jane Eyre Adaptations. The story is way too short, the acting is not really convincing as a result and it could’ve been a whole lot better. Too many things are missing. Dramatic Music, however, isn’t one of them …