All About the Brontës challenge 2010 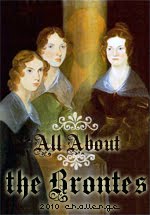 Over at Laura’s Reviews, there’s a challenge for 2010: read/watch anything by or about the Brontë sisters between January and June. Between three and six things. Sounds easy enough!

For more info, and to officially sign up to the challenge, see All About the Brontes Challenge 2010.

I have eight Jane Eyre adaptations that can be watched (and obsessed over, naturally), two to listen to (have started one of them already, i.e. the one from ’91 with Ciarán Hinds as Rochester), and then there’s Tenant of Wildfell Hall that I could re-watch, and three Wuthering Heights adaptations. Two I’ve recently written about, so maybe I’ll skip those, just like I’d probably skip Jane Eyre ’34 and ’83 for the same reason. I’ve not written about Wuthering Heights the book yet, and I have Agnes Grey still to read… maybe give Jane Eyre another read as well… maybe.

So… I think my goal will be to experience and review as many as possible of these:

If studying hasn’t driven me bonkers, I might decide to take up that Jane Eyre audiobook thing again… but I’d have to be pretty mad for that. Not just that it has lots of peculiar old words (especially for someone whose first language isn’t English) but it also has a load of French, and that’s… that’s about as scary as trying to pronounce the written dialect in Wuthering Heights. We shall see. I’m a bit tempted by it because of starting to listen to the Hinds radio adaptation… but yeah. A whole lot of Brontë it will be. Yay!

A very useful link: The Enthusiast’s Guide to Jane Eyre Adaptations, which is where I got the 1934 film and all the radio adaptations from. As in, the page has download links. 🙂

7 thoughts on “All About the Brontës challenge 2010”