Based upon the novel by Catherine Cookson, The Glass Virgin is about a young girl called Annabella (Samantha Glenn), who lives in a big house with her mother Rosina (Christine Kavanagh) and father Edmund (Nigel Havers). Edmund has got himself into a lot of debt, has a mistress secured in an off-limits part of the house, and things are perhaps not as rosy as young Annabella would expect them to be.

When visiting her father’s glassworks, Annabella is nearly run over by a spooked horse, but luckily, one of the glassworkers got her out of the way in time. The glassworker, dashing young Irishman Manuel Mendoza (Brendan Coyle), has a good eye for horses and as a thank you for saving the girl’s life, is offered a position as stable groom.

Time passes, Manuel teaches Annabella how to ride a horse, and eventually, she’s grown into a young woman (cue Emily Mortimer). The family are out of money, the young man Annabella expected to marry has just got engaged to another woman, and the other suitor is not someone Annabella is going to agree to marry. Ever. Her father snaps, declares she’s not who she thinks she is, and throws her out.

Soooooo … as these things go, Annabella finds herself penniless, classless, and on the road with Manuel …

While I do love a period drama, let’s face it, the only reason I’ve been waiting for this to be shown on TV is this: 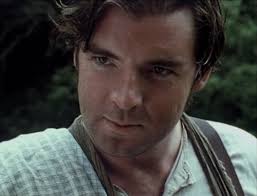 I could totally just turn the rest of this review into a picspam of Brendan Coyle as Manuel, and consider it a job well done. So not only is the character totally dreamy, he looks like that ^^ and to top it off, that wonderful, velvety voice has an Irish brogue. You can’t hear it from the pictures, of course, but think melted chocolate. Totally worth it.

However, as it would be terribly shallow to be so hung-up on the presence of one particular actor, however gorgeous, I should also point out that he’s a wonderful actor. Another wonderful actor – even if his character is almost, but not quite, entirely unsympathetic – is Nigel Havers. Edmund is not a nice guy, to put it politely. Emily Mortimer makes Annabella look like a fish out of water as soon as she’s forced into manual labour, and Annabella adapts to the new life suspiciously fast, but never mind. She does a great job, even if Annabella is annoyingly naive and even passive at times.

For that matter, I wonder how many attempted rapes Cookson wrote about. She wrote a ton of books, and considering there are two in this story alone … that doesn’t bode well. It’s reinforcing a negative stereotype, because let’s face it, not all men are uncontrolled sex monsters. Some are, sure, as are some women, but the vast majority are well-behaved and wouldn’t just go “we’re alone, I should force myself upon this woman while I have the chance”. You can also tell the two characters are scumbags straight from the off, which isn’t necessarily the case in real life.

Yes, the story is melodramatic but it’s still an engaging tale of a young, privileged woman whose reality is smashed to pieces and she’s forced to milk cows in order to survive. Perhaps a stark reminder that life doesn’t always work out the way we expect it to. Oh yes, and the ending bit is frustrating, because you’d think “YOU COULD HAVE JUST TALKED TO EACH OTHER, FOR GOODNESS SAKE”, but never mind. After all, it is terribly romantic …