If you’ve seen the blog the past couple of Sundays, you will have seen a re-telling of when the 18-year-old me went abroad to attend the Modern Talking Fanclub Party. Last week, I found out I had won a candle-lit dinner with Thomas Anders, and this week, I decide to go fan-sightseeing outside of Koblenz. Perhaps not the best idea I’ve ever had.

Was woken up several times by my room-mate who were getting ready to leave, but she checked out at 9. Then, finally, I could sleep, because I woke up with such a headache. I was going to start the day in Höhr-Grenzhausen, but then I had to wait so long for the bus to come, so I decided to go into town and take the bus to Münstermaifeld instead, and I did. Got off in Polch, and changed bus. It’s not very far from Koblenz to Münstermaifeld, but the buses don’t exactly go straight from A to B (or K to M), they go up and down and left and right and back and around and not like normal buses. 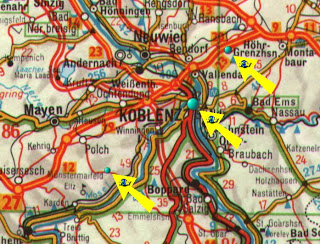 The busdriver from Polch to Münstermaifeld, Heinz, was very kind. He didn’t know any English, so we tried to communicate in German. He asked where I wanted to get off, and I said that I didn’t know, just somewhere in Münstermaifeld, because that’s where Thomas Anders grew up. He didn’t know where it was either, so he called a friend of his, and got her to meet up at the bus.

In two minutes, she was there, and I said thanks Heinz and hello to Brigitte, who spoke English. She said she thought it wasn’t in Münstermaifeld “city” Thomas Anders was from, but outside it, in Mörz, but she wasn’t sure, so we went to a bookshop and asked. Yep, Mörz it was. My new room-mate is Libby from Australia, by the way. She just came in and then went to the toilet. She seems nice (and she speaks English!!!).

Anyway, in the bookshop, there was an older and a younger woman working. The younger one, Christiane (whose father is an Modern Talking-fan apparently), took Brigitte and me in her car, Brigitte giving her road directions. Lil (TAML/DBP) had told me Münstermaifeld was very small, like only one street and three houses, but Münstermaifeld was a whole lot bigger than that!

Mörz, however, fitted the description perfectly. We found the right street, and the house (we think it was the right one, but there was no name or number on it, so we’re not sure). The house looked so nice! Definitely the sort of place one would like to live. There was a little garden, and I could just imagine little Bernd running over the grass. Christiane and Brigitte offered to take a photo of me and the house, but I didn’t want to go THAT far! *LOL* But I took a picture of it to keep as a memory, and then we went back to Münstermaifeld.

By the way, the town is pronounced “Münster-maifeld”, like two words instead of one. I was invited to the bookshop until the next bus came (Brigitte left us after the car was parked). I bought two books there. :c) I felt like I had spent way too little money in Germany… *LOL* In the car, Brigitte told me Thomas went to school in central Münstermaifeld, and sang in the school choir. With the bus earlier, we went by a Haar-Studio Weidung (hair salon), which I think Heinz and Brigitte said belonged to Thomas’ uncle or something (I’m not sure, because they spoke German with each other).

Back in Polch (I didn’t notice we were there until the busdriver called out “Nach Koblenz hier aufsteigen!”…), I got stamps and posted my cards. There was a strange smell there… Hmmm… anyway. When I was back in Koblenz, it was over 5pm and dark already, so I didn’t go to the Moseltanzpalast, and it was too late to go to Höhr-Grenzhausen, so I went to McDonald’s, and then to Reuffel to give TAML today’s report.

I also managed to find a department/grocery store, so I bought something to nibble on, and drink, and also scissors. I hadn’t found any earlier, and I didn’t bring any scissors with me… :c( The store only had 3-packs, so I got a big one, a medium one, and a smaller version of scissors (what the hell, my nails needed cutting Desperately if I was to eat with Thomas Anders…!).

When I got back to Ehrenbreitstein, I noticed the lights were on in my room, and when I got in, there were sheets on a bed, but my roomie hadn’t shown up. Then a girl entered, and we said hello, and she asked if I speak German or English, and I said I prefer English, and she said she was Australian! Nice to finally get someone to talk to who knows English! :c) We have been talking tonight, which was nice.

I called Hotel Reinhart, but no answer. I was there this evening before I went back to the youth hostel to see if it was the right hotel (i.e. the one Franzi (MTTC) stays at). It was, but she and her father were out at the moment. I also called the number Birsen (TAML) gave me, but they said it was the wrong number. Since I had put in a 5 DM coin, and I wouldn’t get any change back if I hung up, I called home again and said hi.

I killed a spider this morning, you know. It was in the ceiling (kind of, anyway), and too close to my bed for me to feel comfortable, so I threw a shoe at it, and after a few tries, it fell down squished. VICTORY! Yay me! It was the big daddy longlegs type without wings. The same kind I saw in England, actually. Ewwww…

Oh, walking up the mountain to the Festung, I saw a hare! Which was nice. Just before I went to brush my teeth (the “evening toilette”), I got a butterfly feeling in my tummy. Oh my gods. Tomorrow. The Fanclubparty. The Dinner with Thomas Anders. Dear me. I hope I will be able to sleep tonight… I will try. Oh my gods oh my gods oh my gods!!! Must calm down. Good night.

I do have a photo of the house Thomas Anders grew up in, but it’s not one I’m willing to share publically like this. At the time (at least), his parents were still living there, and I’m not comfortable showing their residence like that. Like I said above, it’s was a very nice-looking house. Next Sunday, the fateful day of the Fanclubparty has arrived … and with that, my first meeting in real life with my favourite singer! 🙂