Have to admit, I’ve never seen an episode of Skins in my life, but there were three things that made me want to watch this particular episode: 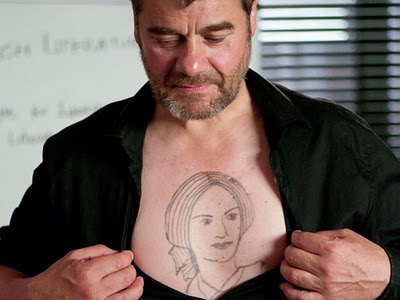 The English teacher (Gordon Kennedy) only had about two scenes, the second one is the one where he ripped open his shirt and asked the students about the tattoo. A boy suggested it was his mum, but the teacher showed his forearm instead, where the image of his mum was tattooed between Charles Dickens and Vladimir Nabokov. No, it’s “the original punk, Charlotte fucking Brontë!” Dude, you had me at the shirt-ripping and Scottish accent. Without the staff and the medieval clothing and general burliness, Gordon Kennedy is actually really handsome! Who’da thought it, eh?

Anyway, the episode centred around Franky, new girl in town, played by Dakota Blue Richards. It’s always tough starting in a new school, but for Franky, it’s even more difficult. Her style is rather masculine, you might say, she has two dads and was severely bullied where she used to live before the move to Bristol.

Franky’s story was really compelling. I was curious to see what Lyra from The Golden Compass looked like a few years later, and well, as above! I guess they really won’t be filming any sequels to that film, by the way, which is such a shame. Those books are freaking AWESOME. But anyway.

Seeing Franky trying to fit in, find friends and then when she had found some, the queen bitch of the new friend group decides to, well, show her true colours and betray her trust in a horrid way. You could tell a mile off that she was going to do something horrid, just not when exactly. Luckily, there were some people there who were also genuinely nice.

Maybe I’ll stick around and watch some more of this show. I’m intrigued. It’s actually a pretty good show. So yeah, who’da thought it?