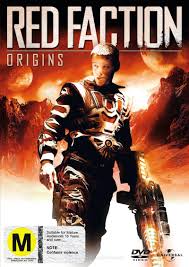 Jake Mason (Brian J Smith) belongs to the colonisers. As a child, his sister Lyra was taken by some soldiers in white – let’s call them White Faction, just because – and their mother killed. Alec Mason (Robert Patrick) has never really forgiven his son for letting Lyra out of his sight. For all intents and purposes, Lyra is considered to be dead.

On a mission to retrieve some goods from a crashed spaceship, Jake sees some white-clad soldiers – just like in his childhood memories! – going through the wreckage. One of them, a girl roughly his own age (Tamzin Merchant), he instantly recognises as his sister. Lyra isn’t dead after all! Just a shame no one will believe him.

Jake goes off to search for Lyra, aided by Tess (Danielle Nicolet), a damsel mostly in distress. They come across a couple of Marauders, Corvallis (Gordon Kennedy) and Leo (Devon Graye), and together they attempt to find, and hopefully be able to retrieve, Lyra … and thwart White Faction’s nefarious plans, whatever they may be, but they’re obviously nefarious, because their leader (Tamer Hassan) is so obviously not a nice guy.

I was watching this with less than keen interest, until suddenly, I sat up straight and exclaimed “Hey, it’s Little John!” because Gordon Kennedy came on screen. Not that his presence helped that much. Red Faction: Origins is apparently the feature-length pilot of a TV series, but Syfy haven’t decided whether to go ahead with it yet or not, says Wikipedia. It’s apparently also based on the Red Faction video game series, and it’s funny, because when I saw the title of the film my first thought was “hmm, isn’t that a video game?”

As for this film, well, it’s a sci-fi adventure on the red planet, but the proud Martians aren’t aliens, they’ve all come from Earth and terraformed Mars. It’s okay, but it’s not particularly engaging or interesting, and perhaps just a tiny bit too wrapped up in its own mythology to make outsiders clock-watch just a wee bit. There are some good ideas in here, like with the White Faction, but then you don’t get them explained too well and why they do what they’re doing and so on, so it falls flat.

Then there’s the brainy but super-whiny Tess, who gives females everywhere a bad name. Oh sure, she’s brainy and resourceful … at times. Most other times, she’s either screaming or terrified (or both), or needs a man to hold her hand. Yechhh.

Let’s just say it’s not the sort of film I’d rush out and buy the DVD of, or indeed watch again whenever it comes on TV next. Once is more than enough, but bonus points for the British actors.