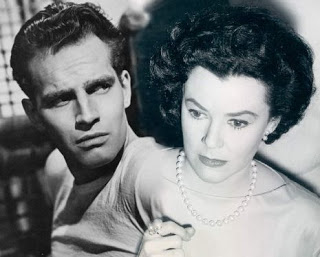 This production of Jane Eyre is just short of 60 minutes long. To anyone, that should ring some serious warning bells, because you just can’t do the story justice in that short space of time! The 1934 film proved the point perfectly, and this is only marginally better than this made-for-TV … thing starring Mary Sinclair and Charlton Heston.

It begins with Jane outside the gates of Lowood – leaving it, and being told she needn’t bother coming back. At Thornfield (the only exterior we ever see is what looks like a painting), she’s told by Mrs Fairfax that “perhaps you will bring warmth to it” – in fact, Mrs F greets her with a hug, aww. Little Adèle is sitting in an armchair and doesn’t react at all to the newcomer until Mrs F prods her. Yes, prodding. The girl doesn’t even look up to see who has entered the room!

We get the usual spiel about Mr Rochester and his funny ways, but I was more distracted by the way the dresses looked like they were from a 1940s fashion outlet, rather than from the 1800s.

Just as we’ve been introduced to the mad laughs of the mad wife in the attic, Mr Rochester comes home. There is no Hay Lane. In fact, there are no external scenes at all, really. Everything happens in one and the same room (bar a very few exceptions): the lounge, into which the front door opens. This is as low budget as you can possibly get, so surprising really that they’ve managed to get such big names to star! (Okay, I don’t know anything about Mary Sinclair, but I’ve heard of Charlton Heston.)

You don’t get to see Rochester’s face for quite some time, it’s just a pair of hands holding a cane and playing with it, asking Jane to play the spinet. Reminds me of classic Addams Family – and in fact, when Rochester’s face is finally revealed, with that cape, I can’t help but think of Dracula!

As innuendos go, I couldn’t help but giggle at Jane’s “I shall do my best to give satisfaction”. Anyway, at first, I thought they were skipping the fire – Rochester goes off to a ball at the Ingrams, but no, before that, there’s a weird scene where Jane is on the sofa and Rochester appears to put his foot in her lap. IN. HER. LAP. What the hell?!

Anyway, then it turns out that no, the fire scene wasn’t skipped at all. Rochester has fallen asleep sitting in the armchair in the one room on the set, Bertha comes downstairs in her nightgown, bends down next to the chair and sets fire to the floor … or so it seems. It’s the chair, apparently. Jane shows up, fire is put out and cut to commercial break.

The series this episode is from is a “Westinghouse Program”, and Westinghouse is a company that makes ovens and other newfangled electrical items. Oh, those were the days.

When we come back from the break, the house party is in full swing. That is, Blanche Ingram and her mum have come by for a visit – no expenses spared on this show! Jane plays the spinet for Blanche, who isn’t too impressed.

Adèle keeps referring to Rochester as “Papa”. All the while, Jane has realised she’s now in love with Mr Rochester (however that happened), and confesses her love for him to Mrs Fairfax. Oh dear. Then the man himself comes to ask forgiveness “for the rudeness of his guests”, and lo and behold, to my amazement, “Good-night my—” actually made it in! Score!

… But then they ruin it again by having him saying that his fortune isn’t so vast after all – straight to the Ingrams’ faces. They of course see no reason for staying. Jane is still under the illusion that Blanche Ingram is the intended bride and starts packing, because she’s heard there is a position available in Ireland. Adèle is crying during this, because she can’t stand the thought of Jane leaving. Aww.

Just when you thought there would be no Richard Mason, he shows up to talk to Grace Poole. Meanwhile, there’s a wedding at Thornfield, out on the patio. From a window upstairs, Bertha looks on. And then there’s another ad break. This time for a Westinghouse electric blanket, because who wants to sleep under 12 lbs of duvets? (Hrm, well, I can’t believe it’s almost mid-June and we’ve still got the heating on and I have to put the winter duvet on top of the summer duvet the past few days because I’m still cold at night!) (UPDATE 2021: Also? Weighted blankets are a thing now.)

Anyway. There’s an awkward wait in the parlour while Grace fetches Bertha and the story is revealed. Jane sits brooding under a tree (OMG, a scene change!), where she hears Rochester’s voice. When she gets back to Thornfield, she finds out that only the west wing of the property burned down, that the servants got Adèle out and then, only then, did they go to wake Mr Rochester. (WHAT!?) They’re reunited and they live happily ever after.

This adaptation of Jane Eyre follows the book sometimes, when it sees fit, which isn’t particularly often. It cuts Lowood and Morton and Gateshead completely out of the picture and is mainly filmed in one particular room, which gets a bit dull after a while. It tries to be Gothic, but fails. It’s less laughable than the 1934 version, but it feels as if the 1934 version at least tried. No, it doesn’t  really work, I’m afraid. It’s not even listed on IMDb and it’s better best forgotten, I think.

1 out of 5 monobrow Rochesters.