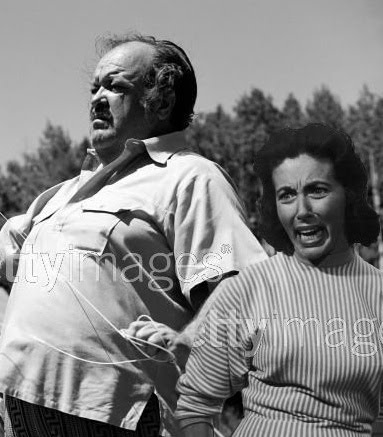 Yes, well, frankly that was my expression when seeing this Rochester as well, but hey, b&w lady, you don’t suppose you’re being, umm, a little bit rude? This is a radio adaptation, so the fact that this Rochester looks more Jake and the Fatman than Toby Stephens can be put aside.

Starring Peggy Webber and William Conrad (Jason Lochinvar ‘Fatman’ McCabe of the aforementioned series – not surprised, are you?), this was first broadcast on 22 November 1947 and has a runtime of 26:48. The production is called “Favorite Story”, which means they’ve got a celebrity to pick a favourite story, which they have then turned into a radio play. In this case, it’s Broadway producer Brock Pemberton.

Filled with the Dramatic Music I’ve now come to expect, it starts off with Jane returning to a burned-down Thornfield, which has her remembering the first night she came there, and was summoned to meet with the owner, Mr. Rochester. Hrm, yes, abbreviated a bit…

Mrs. Fairfax had a funny accent; she sounds a bit like a Londoner. While the London accent isn’t funny per se, it’s just odd to hear it in that character. She comes and interrupts my favourite scene, the one with the shoe-tying and being “a little depressed”, to announce a Mr. Mason has arrived.

Mason gets attacked, Jane nurses him, then there’s a quick jump to proposal and interrupted marriage. Jane says she goes from one governess position to the next over the next few months, until she can (Dramatic Music) hear Rochester calling for her, and she decides to return. She brings the story full circle – Thornfield had burned, Mrs. Fairfax tells her the story, and takes her to see Rochester, who asks her to leave in a very dismissive way. She closes the door, he moans to himself that she’s gone as he think she closed it from the other side, but of course, she’s still there, and she’s not going anywhere, Dramatic Music, The End.

Adèle is only mentioned. Blanche is a by-the-by character having her “don’t tell mamma about governesses!” speech and of course Rochester can’t marry her. She lost interest after hearing that false rumour of him not being worth quite as much as anticipated. Bertha has a right mad cackle.

All in all, it’s not too bad, even if it’s been shortened a lot. I missed some emotion and personality in Rochester’s lines – and Jane’s too, to be fair – but it’s a bland production. Not very memorable.