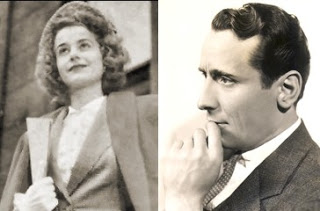 Vicks Matinee Theater broadcast their version of Jane Eyre on 3 December 1944. It starred Gertrude Warner and Victor Jory and has a runtime of 29:49. It starts out with a word from the sponsor – the cold remedy company Vicks, who “more and more millions of people” use. That sentence just sounds wrong to me. More and more millions?

This Dramatic Music-filled version is different from other radio adaptations. By different, I don’t mean in a particularly good way. It’s different in a bizarre and “er… okaaaay…?” kind of way. They’ve gone whole hog with the gothic elements – like the windy sound effects of the wiley, windy moors outside – and changed things around in puzzling ways.

It starts out in Thornfield, “an eerie, somewhat evil house” (!), with Grace Poole and a Bertha madly chanting “Fire in the skyyyy” over and over. Grace Poole speaks to herself about revenge (!) and it’s all a bit strange. Grace Poole is Rochester’s housekeeper in this version. There is no mention of Mrs. Fairfax whatsoever, she’s been completely forgotten about. Rochester is present when Jane arrives to the scene, which happens right around the time where there’s a major scratch in the record this seems to have been recorded from. The sound in general is not great, with scratch noises and echoes (sounds a bit like everyone’s stuttering with the ho-how the-they sa-say thi-things).

Adèle is left in, but she has a problem saying Eyre, and calls her “Miss Ay-er”. She can’t pronounce the name because she’s “mostly French”. The true daughter of Paris is mostly French now?

The fire scene: Wake up, wake up, breakfast is served. Oh, no I mean, “Wake up, wake up, your curtains are on fire.” They sound about the same. He must’ve fallen asleep in his chair, and the wind must’ve blown the candle over and set fire to the curtains.

Jane doesn’t want to stay at Thornfield after the fire, but she also says she doesn’t want to leave. Make your mind up, woman! She’s also turned into a right nag, keeping on trying to find out what’s going on and what that laugh is about. “Tell me what it is, what are you hiding?” She’s just a few “go on” short of Mrs. Doyle from Father Ted.

I liked the line, “Don’t stand there looking so self-righteous.” It was amusing, somehow. There’s talk about living on the moon and eating manna, which is a little strange, but considering in the book, Jane talks of how the faerie folk have left England centuries ago, it fits in. For all I know, perhaps the living on the moon bit is actually from the book, but considering the state of the rest of this production, I doubt it.

There are no voiceovers here to explain and abbreviate things. There is also no mention of any house parties or Blanche Ingram. Very peculiar adaptation. Bertha comes in here and there with her mad cackle and “fire in the sky” talk.

At the wedding, Briggs comes along to interrupt. Bertha is revealed and of course Jane decides to head off. She’s being driven by John (how come it’s always the servants who have the best British accents in these old adaptations?), but she looks back and sees that the house is on fire and asks him to turn around and go back.

Bertha has decided to put that “fire in the sky” at last, and Jane is on the ground with Grace Poole when Rochester rushes in to get Bertha, and everything is witnessed by Jane there and then. Afterwards, Dr. Carter (by now, I half-expected him to be called Rivers), says that Rochester is blind, but who cares when the mad wife is dead and they can live happily ever after? The show ends with Rochester proclaiming that he can “believe in God once more.”

Curtains at ca 27:22, and the rest is chatting about Victor Jory’s career and cough syrup. They keep saying “Jane Eyre, starring Victor Jory” and Gertrude Warner is just mentioned in the main who’s who. Sexism, or the fact that she seems to mainly have been a radio actress whereas Jory was a film actor as well?

It’s not the best adaptation by a long shot. It’s one of the worst, I’d say. It’s changed around and more than half of the plot has been omitted, and it doesn’t have the proper feel of Jane Eyre. Thornfield is a beautiful place, it’s just that Rochester thinks of it as a dungeon. To others, it’s rather pleasant. Here it’s a creepy old house which is “somewhat evil”. Bah, humbug! I think it’s a toss-up between this one and the 1943 Weird Circle adaptation on which radio adaptation is the worst.