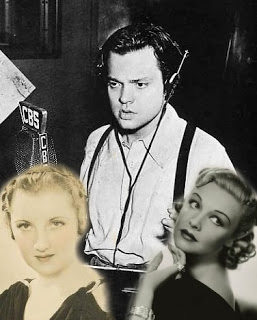 There are two reasons why I’ve chosen to do a two-in-one post for these productions instead of posting about them separately:

To begin with the earliest one, the Mercury Summer Theater from ’38,  it’s presented by Papp’s Blue Ribbon beer we’re reminded of a few times, and as it’s only around 26 minutes long or so (file’s 28:48 but if we remove the ads and small talk), we cut straight to Jane leaving Lowood, saying what an awful place it had been. Of course, as it’s so short, it has had to be shortened a lot, but surprisingly, it’s actually a GOOD version! It’s fairly true to the book, as much as you can considering how much has to be cut out to still tell the story properly. I really enjoyed it.

I’m not surprised Orson Welles did a good job as Rochester on film in 1944 considering how much practice he has had at the role! These two radio productions, another one in 1944 (which I’ve yet to listen to) and then one in 1946 (which I haven’t got). From that perspective, I guess he must’ve really liked the character, or why would he have played him so many times, and produced at least two? It bodes well!

The Campbell Playhouse – if you thought it had to do with soup, you’re correct, that’s where the name comes from – is 58:57 long and begins with about five minutes of talking about soup and Orson Welles talking about the Brontës and their lives and says his favourite Brontë was the father, Patrick, and tells a story of how the man once got bored of the company present and thus fired a gun inside the house and told people to go home. Or something along those lines. He also talks about the story of Jane Eyre and calls it “anti-Christian”. Erm, say what? The end strikes me as very Christian.

Anyway. It starts at Gateshead, where Jane tells Brocklehurst she must keep well and not die. Then it’s off to Lowood for “eight years” and then Thornfield. Wedding, mad wife, break-up, reunion. It’s an extended version of ’38 with some extra bits of music here and there. When Jane goes away, she is a schoolteacher for a bit and then has to return because she wonders what has happened, as she has written to Mrs. Fairfax without getting a reply.

The last five minutes is about thanking the cast and crew and it seems to be the final episode of the Campbell Playhouse so they talk about that… and of soup. Speaking of which, I’m kinda hungry now.

After the other versions, I wasn’t expecting much from these two plays, but after I heard the first one, I was pleasantly surprised, and found the second one to be just like the first, only about twice as long, so a bit more detailed. Like the ’38 version, it’s true to the book, if very abbreviated, and is well acted and actually makes for a decent listen. Well done, Mr. Welles!