So, we finally made it to North Lees Hall outside Hathersage in north Derbyshire. (Previous post about this day is here, by the way.)

We drove up to the house, parked on the side of the field where other people were parked, tried to get an overturned sign to stay up in the wind (it wouldn’t), and walked up to the old house.

First impressions, aside from fangirly glee of being somewhere where Charlotte Brontë had been and been so inspired by, was that the house itself is rather on the small side, but wow, the views of the Derbyshire hills from there are extraordinary!

How’s this for a view?

The reason behind going to North Lees Hall in the first place is of course that it’s one of the buildings that inspired Charlotte Brontë to write about Thornfield in Jane Eyre. In fact, the description of Thornfield Hall does ring true with North Lees (which also, as it happens, was the ancestral home of the Eyre family), with a tower and turrets and the surroundings, nestled among hills and so on. It’s not exactly massive, though. You couldn’t host a big house party, because it’s nowhere big enough. A couple with a couple of kids or no kids at all could live here okay, but it’s not much bigger than that. Anyway, I get ahead of myself.

Happily snapping away on my camera, we made it into the house and bought the guide book. (When in Rome and all that.) The entrance was small and ancient, and from there, what looked like rather rickety old wooden stairs led the way to the next level, where there was a sitting room.

Reservations going up these stairs? Only a bleedin’ handful.

Half a level up, the kitchen – all modern (sort of), because the house since it was restored some years ago (it had fallen into disrepair for quite a few years) has been rented out by the Vivat Trust as a holiday home. That’s right, Dear Reader, you can book a stay in Thornfield. Over at ScribbleManiac, you can even see a couple of videos from a stay there.

The bed looks pretty cool, though.

One of the things mentioned in Jane Eyre (the novel) is how the drawing room has a ceiling “with snowy mouldings of white grapes and vine-leaves” (chapter 11). It’s thought that Charlotte Brontë either didn’t look close enough at the OAK LEAVES and ACORNS in the room, or if she thought grapes and vines were a bit classier. This is what it actually looks like, for reference:

Technically it’s not even the ceiling, it’s more like a fancy crown molding. There were also symbols of one leg, which was due to someone losing a leg way back and it became a family symbol or something like that (memory fails me, I’m afraid).

You could also go down another staircase, which was much more modern, but it was incredibly narrow – you couldn’t really pass anyone in the corridor! It lead to smaller, more modern accomodation. For a small house, it was a bit like a maze. A maze with incredible views!

What about the mad woman in the attic? You could go up the stairs to the top, but the end bit leading out onto the roof itself was off limits. No real attic at all, just a door. However, there is a story about there being a mad woman in the attic here at some point in history, so it’s quite possible Charlotte Brontë heard of this legend and adopted it for her novel!

That’s as far as it goes.

I was under the impression that Charlotte Brontë actually stayed in this house for a while, but apparently she didn’t – she stayed down in the village with her friend Ellen Nussey, and they only came up to North Lees for visits, so sadly, she never slept under this roof. Took away a bit of the wow factor for me, but to think she visited and it influenced her description of Thornfield still left me slightly awe-struck.

There wasn’t much of a garden, at least not these days, but you could walk up past the house and get on the trail to go to Stanage Edge, which has also been used for a variety of film productions. Both the Hall and the Edge were used in Jane Eyre ’06. I don’t know which scene of JE’06 yet (need to watch it again) but Stanage Edge is when she’s crying on the moors having left Thornfield. If you recognise one of the shots there as virtually the same as one of Elizabeth Bennett in Pride & Prejudice ’05 – same place.

If it doesn’t look like it’s very far away, it’s further away than it looks.

We didn’t go up there. It would have taken a long walk, which we were not geared up for, and besides, we were still a bit shaky from our near death experience trying to locate the bloody Hall in the first place. It would be nice to go back and go up to Stanage Edge and look out over the moorland, but that’s for another time … when the weather is more reliable, when we have proper hiking boots on and rucksacks with refreshments.

After looking around the small gardens, taking lots of pictures of the Hall from the outside, we headed back to the car and at the end of the drive turned right. Which I believe is the road mentioned on the website in the first place. Sigh. Note to satnav users: post code “S32 1BR” will NOT lead you to North Lees Hall, and it wasn’t clearly signposted that it doesn’t. Where it wants you to go down a side road, don’t. Ignore it and carry on straight ahead and you’ll get there. The side road is a bad place, at least if you’re in a small car. Try “Birley Lane” instead. The Google Map on the Heritage Open Day points to the wrong place. In fact, here’s a corrected version: 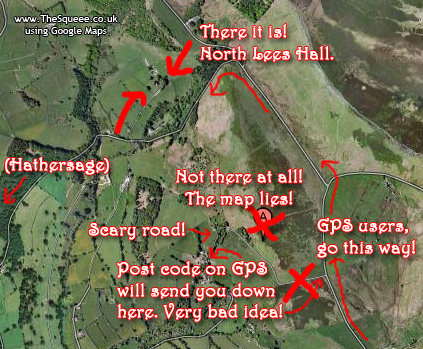 So yeah. It’s a beautiful old house in a breathtaking location. It would be fantastic to spend a weekend or something there with some friends. A visit is highly recommended for any Jane Eyre nerd. The Stanage moors and indeed any of the Derbyshire moors in the Peak District are worth seeing. Makes me want to sing in a falsetto Kate Bush voice every time.

To finish off, here are all the pics I took in a slideshow:

Where did we go next on our journey? Why, we carried on to Chatsworth! 🙂

We went to North Lees Hall for the Heritage Open Days last year, as that’s the only time you can visit without actually booking the Hall for a stay. If you fancy going this year, it’s THIS WEEKEND ONLY:

Pre-booking is required for Thursday and Friday. For more information, see Heritage Open Days: North Lees Hall. Please note that the house is not suitable for wheelchairs or for those who have difficulties climbing stairs. The only wheelchair access for the ground floor, and there are no lifts/elevators or anything and the stairs are a bit wonky.