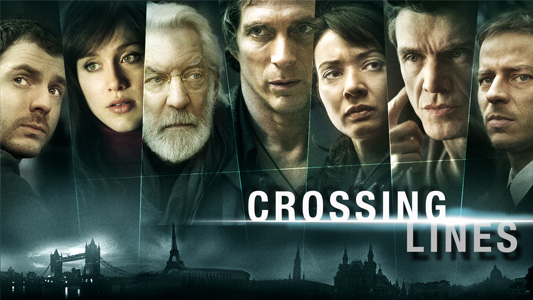 Crossing Lines has recently been released on Amazon’s LOVEFiLM online TV series streaming service. Crossing Lines is a French and German television series in English and features a former NYPD officer called Carl Hickman. Hickman’s life is broken following an injury that he acquired whilst on the job, leading him to become a morphine addict, who now works as a garbage collector in a Netherlands Carnival. The series follows his life as he is recruited for the International Criminal Court specials crime unit, investigating crimes that cross international boundaries.

The series, which was premiered in June 2013, has received mixed reviews so far. Some have accused it of misrepresenting the Criminal Courts nature and purpose. Kevin Jon Heller who is the Associate Professional and Reader in international criminal law at the University of Melbourne speculates that the show is creating misconceptions about the way the court operates and its power. On the other hand, some have remarked that the TV series has a fresh and exciting setting.

The show was created by NBS, Edward Allen Bernero (who created Criminal Minds), and Rola Bauer (who created Pillars of the Earth). It also marked the first time that the Festival de Televelsion de Monte-Carlo was opened with a television series. William Fichtner, whose previous role included the Lone Ranger, will be playing Karl Hickman. The show makes the use of Europe, with the first season being filmed in Paris, Nice and Prague. Bernero has commented that the locations of the show would help the program feel fresh and new.

While the series may not be the most original, and some plot decisions bring the whole series’ credibility into question, it is certainly one to watch. In the premier episode, the crime team tracked the movements of a serial killer who kidnaps woman from one country and kills them in another, hence the title of the series. The credibility issue comes with a sneaky kiss between leading characters as others are looking for the killer, but perhaps this can be overlooked. Overall, this was an intriguing first episode, and Fichtner plays a great and gripping leading role. Let’s just hope it continues to be good.