I’ve often wondered why in Jane Austen the interesting new acquaintances of the heroine’s age are often men rather than women. If the women are bad, they are petty, malicious, proud and inconstant. If the women are good, they are giggly, unintellectual, sometimes sensible, never really deep or profound. (We’re not talking about the heroines themselves). Perhaps Jane Austen preferred the company of men? (We seem to see quotes from her letters favourable things about the gentlemen she met). Was she trying to tell us something by having the heroines be friendlier (in a platonic sense) to men than women?

Look at Pride and Prejudice. Miss Bingley is a petty malicious slanderer who thinks she’s greater than the less well-off Elizabeth. Charlotte Lucas is sensible but then marries the idiotic Mr Collins. Lady Catherine de Bourgh is a vulgar, arrogant interfering old woman. The only exception is Mrs Gardiner, but she’s Lizzie’s aunt, so that doesn’t count. The gentleman, on the other hand … yes, yes, I know Mr Collins is an idiot, but there’s Bingley, Darcy and Colonel Fitzwilliam.

“Miss Eliza Bennet,” said Miss Bingley, “despises cards. She is a great reader and has no pleasure in anything else.”

Which shows you the depths of Miss Bingley’s understanding. She is condemning Lizzy for being an unsociable bluestocking. Lizzy gets her own back later on when Darcy says he only 6 really accomplished women.

Yes, your fine ladies know French, geography, knitting, music, etc. but they don’t read deep stuff for their own pleasure. Well said, Lizzy. In contrast to Lizzy’s preference for reading to cards, Miss Bingley tries to read a book but can’t concentrate.

On the contrary, Lizzy enjoys her conversations with Colonel Fitzwilliam, who’s well-read and cultivated in music and the arts. In the 1980 TV version they even mention the Edinburgh Review, a liberal journal of the early 19th century. I soooo love this version. I know Bingley is a bit dense, but he’s portrayed on the whole favourably, because he’s kind and tolerant of the lower-class Bennets. Darcy himself is well-read, and adds to his already extensive library at Pemberley. And on the whole the men are less arrogant than the women, even Darcy, who is reserved rather than petty like Miss Bingley (anyway he’s shy and unable to respond emotionally to many things, unlike Miss Bingley, who actively chooses to be arrogant). 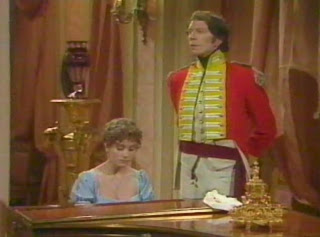 Does this all sound familiar to you? I’m sure you’ve met that complete evil witch at school or work who thinks she’s better than everyone else, and yet everyone finds her so charming. She is often attractive, popular, sometimes rich, with a good job, and makes you feel uncomfortable either by making silly comments or completely ignoring you. Whereas the men in her position don’t set out to make you socially uncomfortable or actively despise you, even the arrogant ones. No wonder Jane Austen was fond of the gentlemen.

I hear you protest that nowadays women are better-educated and so more intellectual. This is true, we are more fortunate in a sense than Jane Austen’s time. But the fact remains women with money then were well-educated (not in Latin and Greek, but in modern languages, and they would have access to the same sort of things their brothers did) and yet many didn’t go out to improve themselves. Yes, they didn’t have to work, unlike men, but many gentlemen didn’t work either. It’s the Nerd Instinct, and it still goes on today. It’s easier to have a nerdy conversation with an intellectual man than with an intelligent woman. Because we women want to look “normal,” not nerdy. Shows us how in 200 years little has changed, has it?

In Persuasion (an underrated book, watch the 1971 version!) we have even nicer men. Charles Musgrove, though a hunting freak, isn’t a bad sort. Louisa Musgrove is nice but she’s giggly and not serious, which rules her out of Jane Austen’s pet circle. I kinda prefer this book because the female rivals are not actively spiteful, unlike the unsubtlety in P&P. And lots of those arrogant ladies don’t show their spite so openly. But I totally have the hots for Captain Benwick, the broken-hearted man who is pining away for his dead betrothed, Fanny Harville. He reads poetry to dwell in his sorrows – Cowper and Sir Walter Scott, favourites of Jane Austen. He has deep feeling and melancholy unlike the rest except Anne. While everyone else seems to be ignoring quiet Anne Elliott (while acknowledging her goodness) she seeks out the morose Benwick. I was hoping they would get married, but … oh well.

Since Fanny Harville was a remarkably accomplished girl I presume her brother also was (those days intellectual women tended to come from intellectual families) which makes it two intellectual men. I suspect Anne talks to Benwick not only because he is left out of the rest’s world, but because he is clever and can appreciate her intelligent side, unlike the ladies who only appreciate Anne’s good-natured side. Captain Wentworth himself must be quite intellectual for Anne to love him, and his love for her despite eight years shows some constancy, even though he tried to forget her and marry Louisa. Gah! I saw more of Benwick’s intellect than Wentworth’s, so he was a more interesting character ….GRRRRR. Even the insidious Mr Elliott is witty, well-spoken and acknowledges Anne’s superiority. He’s just shallow inside.

Mrs Smith is more of an enigma. She is shrewd about people and genuinely likes Anne but in the end she’s emotionally a little manipulative and doesn’t talk about poetry and high stuff. I think she is not so realistically drawn but still passable – at least she’s complex.

In Sense and Sensibility it’s Colonel Brandon who’s sensible and kind-hearted, and even that villain Willoughby is well-read in poetry. Lucy Steele on the other hand is vulgar. Even the male baddies are more charming than the female ones!

Mansfield Park, that supreme underrated achievement (it was what led me to appreciate Austen more) is more complex. Among the two charmers, Mary and Henry Crawford – both are witty, but it is Henry who is into Shakespeare’s speeches – he gets into the soul of the play. Even the sensitive Fanny realises this although Henry is shallow, fickle and adulterous. Mary is the more sympathetic of the two (she is not an adulterous sort, unlike Maria) but she is less intellectual and less enthralled by literature than her brother. Here’s an exception: Fanny actually becomes sort-of friends with Mary, but not Henry, a change from the male-friend pattern in the other novels. (Emma does befriend Harriet Smith, a shallow though nice girl, but that novel is somewhat an anomaly, just like MP. And it is Frank Churchill who shines in conversation rather than Harriet.)

But about Mansfield Park. The heroine is neglected by her cousins Maria and Julia, who are quite high-society ladies (or try to be) and is at least kindly spoken to by Tom, who is otherwise shallow and doesn’t really care for Fanny. Notice how the females tend to be snarky about their own kind if that girl is unfashionable? Whereas even the shallow men don’t make such snarky remarks about that girl. Edmund is an exception as he really loves Fanny (in a sisterly way at first). He is the one who educates her, and they discuss poetry and reviews together – something she does with no one else.

And even Mary Crawford who treats Fanny like a human being only really becomes chatty with her after the more fun-loving Maria and Julia aren’t living at Mansfield Park any more which makes Fanny the only possible female companion her age there. So Fanny is a friend of convenience rather than a friend of the heart. Heartless indeed. Even Sir Thomas, a strict guy, cares for Fanny’s well-being, unlike Aunt Norris and the weary Lady Bertram, who isn’t a bad sort. And Sir Thomas has real principles and can talk smart with Fanny. 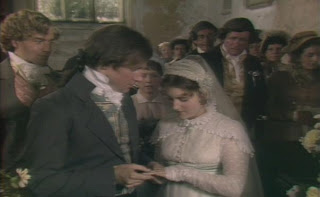 Funny, isn’t it? Usually it’s the talkative ones who tend to have many good friends of the opposite gender, but in Austen the quiet heroines are the ones who seem to genuinely enjoy the conversation of men. Then again Jane Austen had many brothers so perhaps it isn’t surprising.

This insightful look at men and women in Jane Austen’s works was brought to you by guest blogger Caroline, who I take it is a big fan of both Jane Austen as well as North & South, but then again, who in their right mind isn’t? 😀