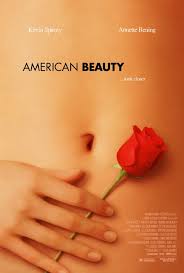 Welcome to suburbia, where the dysfunctional Burnham family is slowly drifting apart. Mother Carolyn (Annette Bening) is a real estate agent struggling to compete with the swish Buddy Kane (Peter Gallagher. Teenage daughter Jane (Thora Birch) would rather her parents died, and father Lester (Kevin Spacey) has a mid-life crisis and decides to start smoking pot and lust after his daughter’s flirtatious friend Angela (Mena Suvari).

Next door, in the Fitts household, moody teenager Rick (Wes Bentley) doesn’t fit into the mould his strict marine corps colonel father (Chris Cooper) wants him to, while his mother (Allison Janney) stands idly by doing pretty much nothing.

It’s a powder keg waiting to blow, and when it does, it propels the film straight into number 54 on the IMDb Top 250 list.

The film starts with Jane saying she wants her boyfriend to kill her parents … followed by Lester’s matter-of-fact voiceover informing us about the day he died. It sets the tone very effectively, even if things might not necessarily work out the way you expect them to.

What I love about American Beauty is that it’s a very good film with very good actors. You can never be too sure what’s going to happen (unless you’ve seen it before, of course), and somehow it just becomes a riveting watch.

From white picket fences with exquisitely pruned red roses and a perfect facade to the world, to the dark chaos behind the scenes, where the most exciting part of Lester’s day is when he gets to have a wank in the shower.

Seeing things from Jane’s perspective, I can see how intensely creepy it would be if my dad ogled my best friend like some kind of pervert, but wanting to kill him for it? Really? I supposed it doesn’t help when Angela’s main topic of conversation with you is sex, and she says things like how she finds your dad sexy as hell. Umm, yeah, that’s just going a liiiiiittle too far for comfort. Lester’s rose-petalled fantasies, on the other hand, are now infamous.

And then there’s the weirdo kid next door, who films plastic bags floating on a breeze because it’s “the most beautiful thing” he’s ever seen. How about looking at a flower?

American Beauty is not so much a film as an experience. It’s a rollercoaster ride of emotions with characters who aren’t particularly sympathetic, but you’re still watching anyway, because for some reason you find yourself sort of caring about what happens to them. After all, we already know Lester’s days are numbered, but who will be responsible for his untimely demise?

Watch it. It’s a good film.